Glen Moray distillery in Elgin produces a range of whiskies which are widely available and competitively priced.

Previously owned by Glenmorangie / LVMH, the distillery was sold to La Martiniquaise; France’s second-largest spirits group in 2008. It has undergone an expansion to support the demands of the Label 5 blended whisky brand, as well as an extensive range of single malts.

The ‘Elgin Classic Collection‘ is the core range of Glen Moray non-age statement single malts. Priced to compete with supermarket-branded expressions and blended whiskies, the strategy is an interest contrast to other single malt brands which are attempting to push their product price-point upwards.

The Sherry Cask Finish is the most recent addition to the Classic Collection after being launched in July 2016. As the name suggests, it’s based on the ‘Classic’ Glen Moray whisky which has then been finished in Oloroso Sherry Casks for a minimum of 8 months before being bottled at 40% alcohol.

Our notes are below.

Fresh strawberry and strawberry chewit sweets. Slightly grassy in the background with a hint of caramel toffee.

Holding it in your mouth, the sweetness subsides and a darker woody flavour arrives, with cocoa dryness also apparent.

Just a hint of sugar sweetness, but the finish is all about that dark leathery dry note, with cocoa powder flavour holding into the surprisingly long finish.

This Sherry Cask Finish is a cracking dram and at an RRP of £22 a bottle, there’s almost no excuse for not giving it a try.

Complexity is always going to be limited with a younger whisky and 40% bottling strength, but this has genuine depth of flavour and that dry cocoa-power finish is delicious. 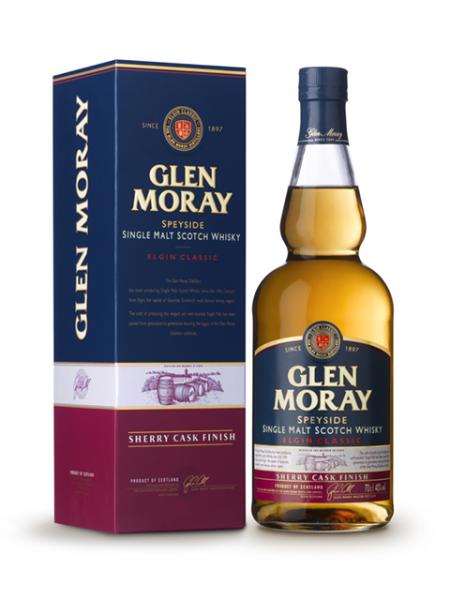