Steve Rush of The Whisky Wire has been running Tweet Tastings for a few years now and it’s a very straightforward (and effective) concept. If you’re lucky enough to be accepted, you receive a pack of drinks samples and then get to work your way through them during the two-hour tasting, sharing your notes and comments on Twitter as you go along.

We recently took part in the Allied Glass Gin Tasting and got the chance to sample some fantastic Gins.

Allied Glass make some of the most distinctive bottles for food and drinks brands and given the current explosion in Gin, this tasting was created to increase awareness of both their bottles as well as the craft spirit inside.

Here is a summary of our tasting notes from the night. 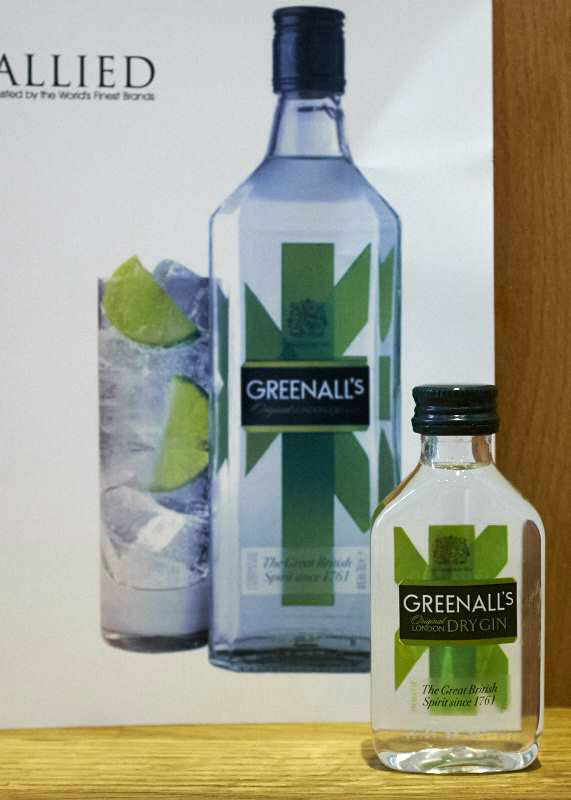 First up was a classic London Dry Gin by Greenall’s. Greenall’s is the Original London Dry Gin, made at the oldest gin distillery in the UK since 1761. It’s bottled at 37.5% ABV.

The sample bottle wasn’t representative of the full sized design, but thankfully the Gin was.

On the nose, there was juniper and lemon – quite mellow and dry though. It opened up really quickly in the glass and coriander and cucumber could also be detected. ‘Smells like gin’ was quite a common comment, which isn’t the most helpful note but quite appropriate given this is the original.

Tasting neat, it was much more gentle than expected. Slightly oily smooth with a dry finish and spicy citrus coming in at the end.

Adding tonic (Fever Tree Indian Tonic Water in our case) and a little lime made a great G&T. Another recommendation was to add a small turn of black pepper into the glass and it worked a treat – really brought out the natural spice of the gin.

A lovely gin and a great start to the evening. 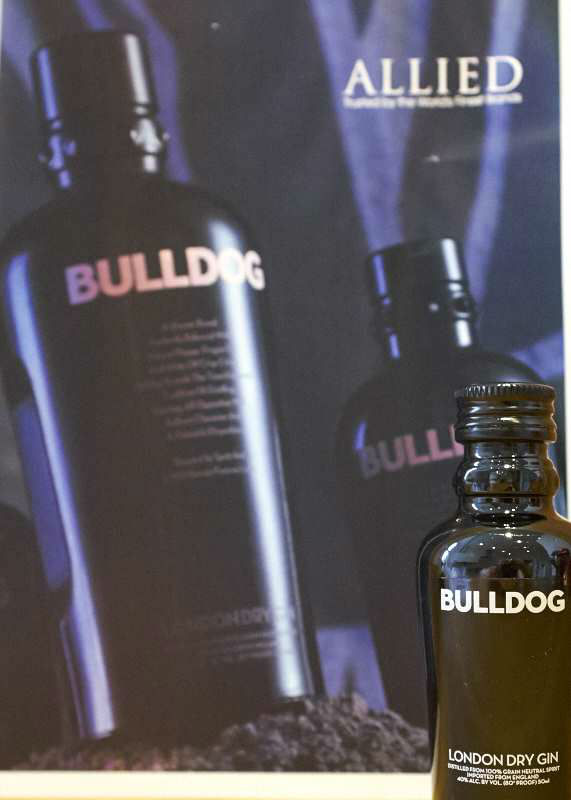 In terms of design, BULLDOG Gin is almost the polar opposite to the classic Greenall’s. The matt black bottle is very distinctive compared to the clear glass of most brands and we all loved the studded collar design around the bottle neck.

BULLDOG is made under contract by GJ Greenall’s (from above), but has a completely different set of botanicals including three which are unique to the spirit (Dragon Eye, Lotus Leaf and White Poppy); it’s bottled at 40% and is described as a modern, new world gin.

The nose was quite different in this one; much smoother with quite a floral smell (hints of lavender could be detected). The neat taste was a bit more upfront with fizzy citrus, green herbs, bay leaf, slight oiliness and a peppery finish. Surprisingly complex and something I could quite happily drink neat.

Adding a little Fever Tree brought out the sweetness in the gin, but think you’d have to be careful as it would be easy to drown it. 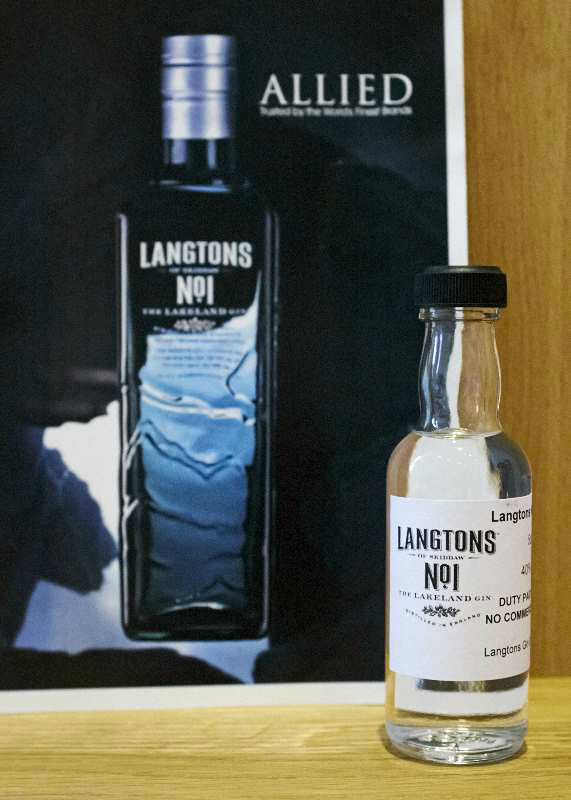 Langtons is based up in the Lake District and has a different flavour profile to the typical London style. It is made with a blend of 11 botanicals including Lake District Oak Bark and is bottled at 40% ABV.

The bottle design is based on a piece of Lake District slate and although our sample bottle didn’t have this design, the full sized bottle looks stunning.

The nose on the Langtons was fantastic; rich perfumey and citrus. Very balanced and my favourite nose so far.

Neat, the taste is also very perfumed; some sherbet lemon, a bit of liquorice, honey. I also tasted some lemongrass and there a was tiny pepper kick right at the end. Really good.

Adding a splash of Fever Tree and a little lemon brought out a big punch of coriander and fennel with some parma violet perfume. 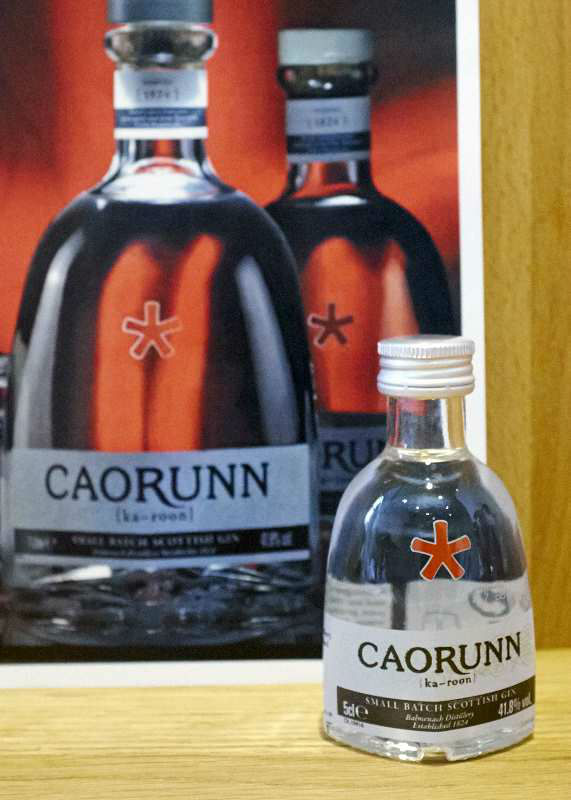 The final pair of gins were from north of the border and Caorunn (pronounced ‘ka-roon’) was the first. Caorunn was my favourite bottle of the night and the fact that our miniature was the same shape was great.

Caorunn is made in small batches at Balmenach Distillery in the Cairngorm National Park and uses local ingredients for the flavour. The pentagonal bottle has been influenced by Celtic knots and the five main botanicals which are used. It’s bottled at 41.8% ABV.

Tonic brings out a surprisingly strong salted almond note and some fresh apple – really interesting and a great G&T. My favourite mixed drink of the night. 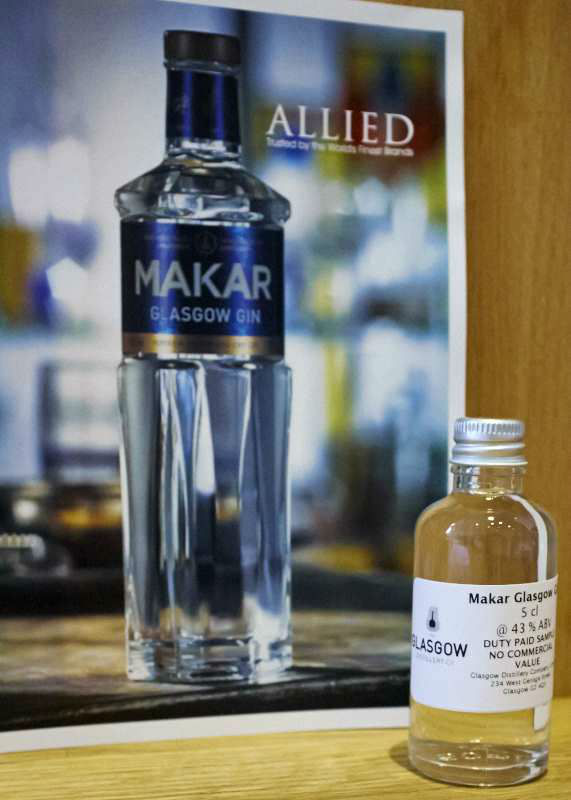 Last sample of the night was Maker Glasgow Gin, launched in October 2014 and the first gin to be produced in Glasgow.

It’s bottled at 43% ABV, making it the strongest of the night and contains seven harmonising botanticals in addition to Juniper.

Like the Caorunn, the seven-sided bottle design refers to the botanical count and it has also been created to refract the light as it passes through, highlighting the bottle.

The nose was by far the strongest of the gins we’d tried, with eucalyptus freshness making your nose tingle and also lemony, metallic, sweet and salty scents.

Neat, the taste was pine sap, rosemary and juniper. Damp mossy flavours rather than clean and citrussy. Not my favourite gin neat and was hoping for better when it was mixed.

Unfortunately, adding Fever Tree didn’t really help – the gin turned soapy for me with the cedar perfume cutting through the tonic sweetness. Needs a more robust tonic water to balance it.

A great sampling of some very good gins, I enjoyed them all with my favourites being the Caorunn and Langtons, but the others not being far behind.

Thanks very much to Steve Rush and Allied Gin for the #AlliedGinTT event. We’re looking forward to the next one!