Create:Eat:Whisky is Jelly & Gin’s contribution to the wide array of events which are being held during Homecoming 2014’s ‘Whisky Month‘.

Hosted in a former condensed milk factory in Leith, the event was produced in partnership with Jura Whisky, and described as ‘a multi sensory journey into whisky’. We managed to get tickets for Thursday night’s event and it was well worth going along.

The scene was set upon entering the building, with dark piles of peat marking a path up the stairs. Dried tree roots were arranged on the floor and pouches of barley were hanging from the ceiling.

This, combined with the candles and paper lanterns which were attached to shining copper piping which surround three long dining tables gave the entire room the feel of an upmarket (whisky-based) arts installation. 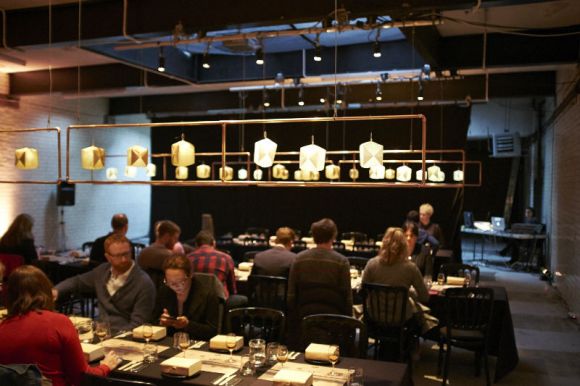 The evening was based around four of Jura’s single malt whiskies and was scheduled to be part guided whisky tasting and part food pairing, but with plenty of time for chatting; it was paced perfectly overall.

For each course, the tasting notes were projected onto the wall and Richard Paterson‘s voice boomed out telling us how to address the whisky and let the flavours develop by holding it in your mouth. There was also an abstract soundtrack which was created using sounds recorded from Jura and the distillery.

We started with the fruity and spicy Elixir which was paired with a selection of oatcakes, cheese, venison salami and pineapple chutney.

It was a flavour combination which worked well – the variety of food flavours being a great match for such a fruity whisky.

Next up was the Prophecy, Jura’s peatiest malt. This was my favourite dram of the night, with just the right balance of smoke and spice. The food pairing was also the most theatrical; smoked salmon mousse with pickled cucumber and squid-ink breadsticks were brought to the table in smoke-filled glass bell-jars which were then opened in front of us.

The amount of smoke made us think of nightclubs before the ban, but it all added to the sensory experience. 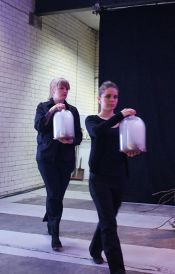 Number 3 was Jura’s ‘standard’ Origin, paired with a pear compote, honey cream and pecan praline. It also came with ‘inhale’ test tubes filled with liquorice and coffee beans. Both whisky and food were excellent, but I didn’t think the combination worked as well as the previous two course. 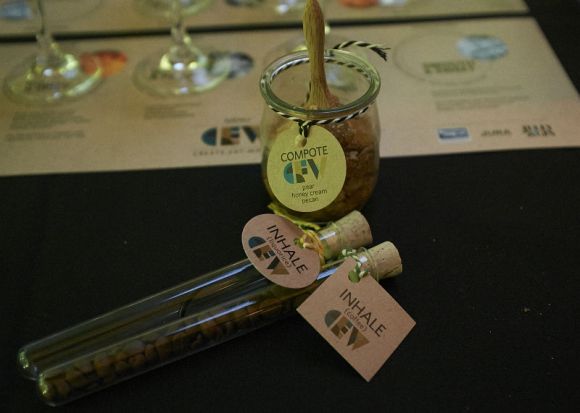 Finally, we had the 16 year old Diurach’s Own which I’d tried in the past and definite rate well. The rich whisky was paired with chocolates by Hello Chocolate which were created especially for the event. These were accompanied by another smelling tube of tobacco and cinnamon and a magical seaweed bowl which send seaside-flavoured steam drifting across the table .

This was another success, with the chocolates and whisky working together to provide thick, complementary flavours.

The evening ended with a short film showing the recording of the various sounds for the soundtrack and a long list of credits to all those who were involved in the production before we made our way back outside.

Overall, another very successful Jelly & Gin event and I’d recommend them to anyone who wants to try something a little different. Jura have an excellent range of single malts and it was great to be able to taste them in a different way with an event which celebrated the flavours without distracting from the whisky itself.