Set on the banks of the River Teith, just outside Doune, stands Deanston Distillery.

This was once a former Cotton Mill, which was transformed into a distillery in the 1960s; not that you can really tell, it looks very embedded into its life as a distillery! The interesting thing about Deanston is that it generates its own electricity and feeds back the surplus to the grid – meaning their whisky is free to produce! (well kind of!)

The tour started with a short video going over the history of the Cotton Mill and then the distillery itself. The tour guide also went over the malting and milling process before heading into the distillery to see the magic happen!

First stop was the Mash Tuns, where the Water and Malt (or Grist) mix together before the malt water is drained and carried off to the Wash Back to start fermentation. The matter that is left is used to make animal feed – so apparently that is why we have happy cows!

In the wash backs, yeast is added to the barley water and left to ferment. This is when the magic starts to happen! Once the fermentation is complete the liquid is now like a strong Wiesbier and this is when it’s whipped away to the Stills for distillation and to be turned into a strong pure alcohol! 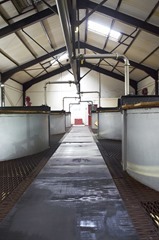 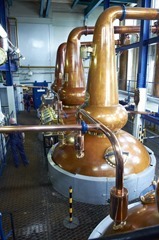 After distillation, the middle cut of the distillate is transferred then to be put into casks, and we were lucky on this occasion to see the men fill some of the barrels, before they were wheeled off to the bonded warehouse to mature.

We had a little peek into the warehouse, where this one is a little more ornate compared to some. In the Warehouse the alcohol evaporates after a while, in what is affectionately known as “The Angels Share”; they get about 2% of the contents a year! The Warehouse was also used in the film The Angels Share, and there is a cask there signed by the cast.

The final part of the tour was of course the tasting!

Deanston do a number of expressions but on this occasion we tasted two – the 12 year old and the Virgin Oak. The 12 year old was most definitely our favourite! 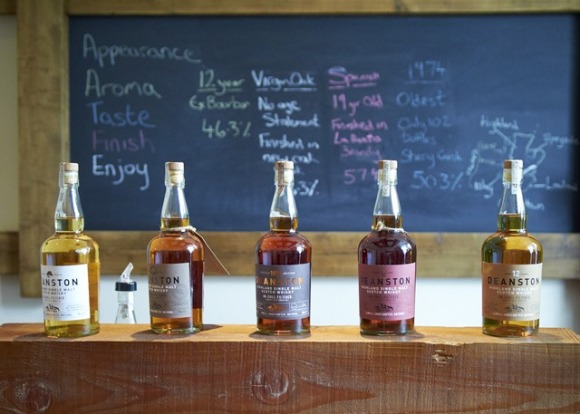 The tour was great, informative and different than some of the other distilleries we have visited. The bonus is that after the tour you can enjoy a bite to eat at the Coffee Bothy, which is beside the tasting room. Stuart and I can sometimes be found in here of a lunchtime, because you can have a great lunch and inhale as much of the whisky fumes as you can!’

We’ve already reviewed the Deanston 2013 Festival Edition and hope to get the 12 year old (and maybe some of the other expressions) notes written up soon!