Unfortunately it appears that Mizuwari closed at the end of 2014.

Mizuwari in Soho is London’s only bar dedicated to Japanese whisky. Meaning ‘mixed with water’, the bar is located in the basement of the Bincho Soho yakitori restaurant on Old Compton Street.

It seats about thirty and the lighting is low with a combination of candlelight and dimmed table lamps (we had to move seats as our first choice was too dark to see the menus!). It also has one of the most extensive Japanese whisky menus we’ve seen (the other notable venue is the Highlander Inn in Craigellachie), offering a good selection of expressions from the brands I’d heard of (Hibiki, Yamazaki) and some I hadn’t (Karuizawa, Ichiro).  They also offer a selection of whisky-based cocktails and will make a highball with a whisky of your choice.

Although I had my eye on a dram of the Hakushu Heavily Peated, since it was the first day of London Cocktail Week, Adele and I decided to choose from the cocktail menu.

Adele opted for the Shoman, a short drink based on pear-infused Hibiki 12 mixed with cardamon, House and Peychaud’s bitters and served in an absinthe-rinsed glass. The glass also contained a massive hand-carved ice ball – very impressive.

I went for the Toyko Sour – a variation on the Whisky Sour; matcha green tea mixed with Hakushu 12, yuzu (a Japanese citrus fruit) juice, sugar and egg white. 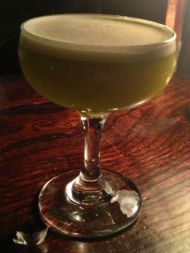 Both cocktails were excellent – the Shoman was sweet and dry, with the absinthe giving a aniseed-y kick at the end.  The Tokyo Sour was all you’d expect from a Whisky Sour and more. The matcha gave a bit more depth of flavour and the yuzu provided a pleasant sharpness.

The drinks were also served with a big bottle of tap water and a complementary bowl of steamed Edamame beans – I presume this was to meet the licensing restrictions (stated on the menu) which stated that all drinks must be bought with food; they were very welcome anyway.

I’d recommend Mizuwari to anybody looking for a slightly different whisky bar in London. I’ll definitely be back, as there are too many interesting looking whiskies on that menu to leave unsampled!