Pickering’s Gin based at Edinburgh’s Summerhall was launched in 2014 and it’s fair to say that their journey so far has been a success.

From collecting a variety of global spirits awards and a VisitScotland tourism aware for the distillery tours to making headlines when their gin-filled baubles became the must-have Christmas gift; the brand is a stalwart within gin circles.

What might not be so well known is Ginerosity; the ‘world’s first social enterprise gin’ which was launched by Pickerings in autumn 2016. The profits from Ginerosity are invested in charitable causes, particularly those supporting under-privileged or disadvantaged young people, so it’s good spirit for a good cause.

Lidl kindly sent us a sample of Ginerosity as part of their Scottish Craft Gin Festival so we took the opportunity to taste it alongside it’s older sibling, the original Pickering Gin. 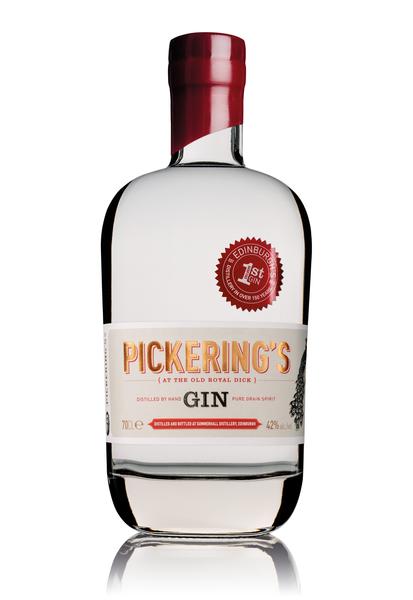 Strong fresh citrus note with plenty of lemon and lime peel being the initial note. A herby pop of coriander appears followed by a perfumed sweetness.

Slightly oily mouthfeel and like the nose, leads with a strong citrus note. The herbal mix is more prominent in the flavour with anise and fennel quite prominent.

Strong bitter clove flavour appears in the finish along with a little peppery bite. Dry citrus notes carry through the a medium length finish.

Lighter in taste and texture with the Ginerosity having a more watery consistency than the Pickering’s Gin. Although citrus is present, it’s not dominant. Instead the slightly more asian flavours of punchy cardamom and soapy coriander lead.

Perfumed until the end, the juniper emerges alongside a slightly peppery kick before disappearing.

Gin isn’t generally designed for neat drinking, however it’s always an interesting exercise. Both the Pickerings Gin and Ginerosity are good gins with a well balanced flavours.

As you may expect, there are similarities between the spirits flavours however they are distinctive, which is good work considering they share the majority of botanicals.

My preference was the nose of the Ginerosity and the flavour of the Pickering’s (go figure) but will happily have either in my next Gin & Tonic and would encourage others to do the same.

Aside from Ginerosity being stocked at Lidl’s Scottish Craft Gin Festival, both brands are available online or at any good spirits retailer.